Imagine a town of wretched winter-blitzed people!  It has been a very cold April, and we were relieved to see signs of spring today.

I planned to sit outside and read Dostoevsky.

The cat objects to Dostoevsky.

Shocking, isn’t it?  The cat did it. She has no idea that chewing books is forbidden.  She’s sweet, but clueless.  And apparently she does not like Dostoevsky.

I cannot read a book in this condition.

I was thoroughly enjoying Demons (also called The Possessed, or Devils).  I started reading it after I finished Chernyshevsky’s What Is to Be Done?, because the translator Michael R. Katz wrote that it is partly Dostoevsky’s response to What Is to Be Done? and to Turgenev’s Fathers and Sons. (There are also references to other books by Turgenev.) 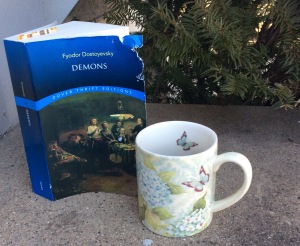 Demons is a milder psychological novel than, say, Crime and Punishment.  Set in a provincial town, Demons has an almost Turgenev-like atmosphere at first:  much  tea is drunk, characters discuss poetry and politics, and the jockeying for social power is constant.  But then the revolutionaries arrive, and beware!

As in Turgenev’s Fathers and Sons, there is a conflict between a father and son:  Stepan Trofimovich Verkhovensk, a liberal humanist of the 1840s generation, has long been a tutor and hanger-on in the household of the wealthy Varvara Petrovna Stravrogin.  His son, Pyotr Stepanovitch, who has been raised by relatives, is a nihilist–only with none of the nobility of Turgenev’s Bazarov.  And when he shows up at Varvara Petrovna’s, his father does not at first recognize him.

At the same time, the moody, gorgeous Nikolai Vsvelodovich Stravrogin arrives to visit his mother, Varvara Petrovna.  She adores him, but there is gossip about him and a mad woman…and is any of it true? Meanwhile Pyotr Stepanovitch is sowing dissension as part of the revolutionary plot.

Stepan Trofimovich, who tries to keep up with modern culture,  reads Fathers and Sons and What Is to Be Done?  He (and the cranky Dostoevsky) find Bazarov a completely unbelievable character.

There is a huge cast of characters, and it is a page-turner.  It rambles a bit, but maybe it will all come together in the end.

I found an old Oxford paperback, Devils, to replace the Dover, so I will be able to finish the book.

I swear I used to have a copy called The Possessed, and I think that’s a better title.  Probably less accurate…

10 thoughts on “Dostoevsky in the Springtime”