If you know my blog, you know I am a great rereader.

My mother and I shared a propensity for rereading.  She wallowed in Gone with the Wind, her favorite book:   it was her fount of personal wisdom.  She advised me when I was breaking up with a boyfriend “not to let him go!  There must be some way!”  It wasn’t bad advice: it is a quotation from Scarlett O’Hara.

Nancy Hale’s 1942 bestseller, The Prodigal Women, has become my favorite pop wallow.  After reading a short story by Nancy Hale in an old volume of Best Stories from The New Yorker, I went on a Hale bender.  A few years ago I described  The Prodigal Women  as “a fusion of Mary McCarthy’s The Group, Dreiser’s An American Tragedy, and Jacqueline Susann’s Valley of the Dolls.”   Set between 1922 and 1940, it is the story of three women whose interests diverge as the years go by but whose lives remain entwined.  And though it is melodramatic, I certainly recognized these characters.

The first part of the novel is the most readable, because it is so resonant of women’s lives:  we  have a literary language to describe the problems of loneliness and friendship. Leda March, the intellectual daughter of a well-to-do Boston family,  is friendless and longs to fit in with other girls:  she is victimized first at the Country Day School in Hampton and later at a girls’ schools in Boston.  Her life changes when the Jekylls, a Southern family, move to Massachusetts because Mrs. Jekyll wants culture:  the youngest daughter, Betsy, takes Leda under her wing, they spend hours giggling and putting on makeup, and both adore Betsy’s lovely older sister, Maizie, who is surrounded by men.  Maizie is their role model.

As the book goes on, the women grow apart and fall into dysfunctional relationships for which literary language seems inadequate.  Leda becomes a successful, and very snobbish, writer in New York, but the nice Jekyll girls don’t fare so well.

Maizie falls in love with Lambert, an artist who is  sadistic in his treatment of this Southern belle. When Maizie gets pregnant she refuses to have an abortion:  Lambert agrees to marry her, though he says she is ruining his life. She is thrilled to marry him, under any circumstances.  But on a cruise to South America he is so  cruel that she agrees to have an abortion. And then the abortion is botched, and her health breaks down completely.  So does her mental health.  And yet Lambert continues to badger her.

Here is an example of the dialogue between Maizie and Lambert.

“Oh, darling, I just can’t bear to have you talk like that.  I’ll be well so soon, now.  It was only for a short time, all this…. You don’t think I’ve enjoyed being sick, do you?”

“No, I haven’t.  I hate feeling old, and tired, all the time.  I’m young, and I hate not feeling young.  The only way I can stand it is to realize that if I’m careful I’ll be well soon and then everything will be lovely.”

“Hell, you’re too optimistic.  You aren’t going to get well.  You’re a born invalid.  You’ll be sick all the rest of your life, and I’ll take care of you.  That’s the schedule.”

And on and on it goes.  Can you imagine?  Poor Maizie!  What a son of a bitch that Lambert is. 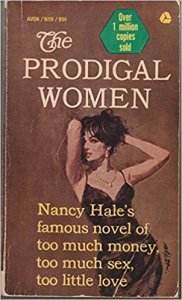 Not how I pictured the prodigal women…

At this point in my rereading,  I wondered, Do I want to reread this whole book?  (I’ve decided to skip the saddest parts.)  Maizie never recovers her health, and spends time in a mental hospital.  Cold, self-centered Leda has an affair with Lambert–they are very alike in their artistic ruthlessness–and coolly sets out to steal him from Maizie, until a socially prominent quasi-friend accuses her of adultery.  Leda marries a doctor she doesn’t love, but she and Lambert eventually become involved again.

Of the three women, Betsy is the most level-headed, happily working for a fashion magazine in New York and going out every night, but she becomes involved with a man who is sometimes violent.  And she sticks by him, because she understands his mental health problems.  We all know about abusive relationships, and know the women should leave as they do in magazine articles and made-for-TV movies.  But does the “should” always happen?  Hale shows that, unfortunately, it doesn’t.

Hale went in this novel where few women dared to go in the 1940s.  And when I think about it, not many women dare to now.  We all prefer something less melodramatic–or do I mean less real?  The ends are not tied up neatly here, but it is a great out-of-print pop literary novel.

4 thoughts on “A Pop-Literary Wallow: Nancy Hale’s The Prodigal Women”