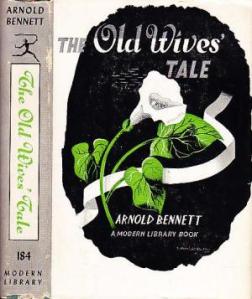 I love the novels of Arnold Bennett, one of the most prolific and enjoyable writers of the early twentieth century. Does anyone read Bennett?  Only five of his books are in print, Clayhanger, Anna of the Five Towns, The Old Wives’ Tale, The Card, and Grand Babylon Hotel.   I try to read a Bennett novel every year: a few years ago I made my way through the Clayhanger trilogy, set in the Five Towns, which are based on the six towns in the Potteries district of Staffordshire, where Bennett grew up; and then Anna of the Five Towns, a novel about the daughter of a miser-factory owner.

But the best by far is The Old Wives’ Tale, published in 1908.  I have now added it to my Favorites of All Time list.  It is reminiscent of  Balzac’s realistic novels, with their interweaving of character studies, the mundane details of life and work, and the panorama of historical events:  in The Old Wives’ Tale, the action is concurrent with the Great Exhibition, the Siege of Paris, the Dreyfus Affair,  and the Federation in the Potteries.  John Wain writes in the  introduction to the Penguin edition: “It is one of the most successful attempts, if not the most successful, to rival in English the achievement of the French realistic novel from Balzac down to Flaubert, Zola, and Maupassant.”

Bennett’s tour de force centers on two sisters, Constance, who inherits the family drapery shop in Bursely (one of the Five Towns), and Sophia, who moves to Paris and first runs a boarding house and then a hotel.  It begins in the 1860s, and follows the lives of the Baines sisters from their teens till death.  Bennett brilliantly divides the book into four different chronological tales, beginning with the sisters’ roots in Book I,  called “Mrs. Baines” (who is their mother); Book II, “Constance,” and Book III, “Sophia,” detail  their work and relationships through middle age;  and Book IV, “What Life Is,” their old age and deaths.

The two sisters are completely unlike:  Constance, the conventional sister, doesn’t mind smoky Bursley, home of pottery factories, and finds it a pleasure to work in the shop.   But restless, pretty Sophia becomes a teacher (which is a step down from trade, in her mother’s eyes), and is successful at the local school until she develops a crush on a flashy traveling salesman, Gerald Scales. Then she foolishly quits her job and goes to work in the shop on the chance of seeing him.  She runs away with him to Paris.  And so the sisters are separated, one in Bursley, one in Paris.  And their worlds could not be more different.

In Book II, Bennett describes Contance’s life in Bursley, which is often monotonous, but with the rewards of marriage and family.  As a young woman, Constance and Mr. Povey (Samuel), the manager, become friends and shyly fall in love.  Samuel’s innovations at the shop seem lower-class to Mrs. Baines:  first he puts up a sign–even Constance thinks that’s going too far–and then, with Constance’s help, organizes a sale (never done before!), and they write out the fancy sale tickets together.  Mrs. Baines objects to their marriage at first, but  yields, mainly because she needs Samuel to manage the shop.  And so Mrs. Baines leaves the house and business to Constance and Samuel.  And how does Constance feel about the routine?  Bennett describes her security beautifully.

Was Constance happy? Of course there was always something on her mind, something that had to be dealt with, either in the shop or in the house, something to employ all the skill and experience which she had acquired. Her life had much in it of laborious tedium–tedium never-ending and monotonous. And both she and Samuel worked consistently hard, rising early, ‘pushing forward,’ as the phrase ran, and going to bed early from sheer fatigue; week after week and month after month as season changed imperceptibly into season. In June and July it would happen to them occasionally to retire before the last silver of dusk was out of the sky. They would lie in bed and talk placidly of their daily affairs. There would be a noise in the street below. “Vaults closing!” Samuel would say, and yawn. “Yes, it’s quite late,” Constance would say. And the Swiss clock would rapidly strike eleven on its coil of resonant wire….

But life takes a strange turn–Samuel’s brother is accused of murdering his wife (it was an accident), and after he is hanged, Samuel’s cold turns into pneumonia, and he dies. Constance loves their son Cyril dearly, but he is out of control after his father’s death, and she finally admits to herself that he is not a good son.

Is Sophia’s life better in Paris? Not at all–her husband Gerald is a rake and a spendthrift, and exposes her to horrors that no Baines woman should live through–and yet she won’t go home.  She sees Gerald’s ghoulish morbidity when he insists on traveling to see the execution of a man. Although Sophia stays in the hotel, hundreds of people sit on roofs or hangout windows of the hotels to see the execution.  Sophia, too, sees everything.  And she understands she has married a coarse man.

There are other parallels between the sisters’ lives. Sophia, too, succeeds in business.  After Gerald leaves her, she  becomes the landlady of a boarding house (formerly run by a prostitute), and later she buys  a hotel. She is busy from dawn to dusk, doing much of the work and cooking herself, and even becomes a bit of a miser.

What a remarkable novel!  Honestly, one of the best I’ve read this year.

22 thoughts on “The Old Wives’ Tale by Arnold Bennett”