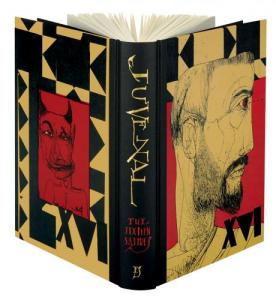 “It is difficult not to write satire,” Juvenal wrote.

Yes, but where is it?  Who’s writing it?

Satire is rapidly vanishing in the U.S.  There’s not exactly censorship, but there has been a weird suppression of stand-up comics and comic actors:  flocks of them have been accused of sexual harassment or sexual misconduct and  banned from their careers.  And where are all the modern satiric poets and novelists? Are they banned, too? Are the publishers rejecting satirists? The pressure to quell voices has come from both the Left and the Right: if a book triggers a sob or a bad memory, if a comedian offends (and which doesn’t?), if a point of view is unpolitically correct, you must shut up the babblers.

The poet Juvenal, who was exiled during Domitian’s reign of terror, began to publish his outrageous satires in 110 A.D.  In the introduction to the Folio Society edition, the actor Simon Callow writes about Juvenal’s outrageous stand-up comedy.  He writes,

I have a rather unusual qualification for introducing this edition of the Satires of Juvenal: I’ve been him.  This surprising manifestation occurred on the London stage, in 1976, in a one-man show called Juvenalia, and it proved to be the surprise sensation of the Fringe season that year, lauded with rare unanimity by all the major national newspapers.  The triumph was essentially Juvenal’s.  His scabrous commentary on his own times was perceived as startlingly pertinent and laugh-out-loud funny, filthy and deeply, gloriously unpolitically correct, even for 1976, when the concept had yet to be articulated.

Juvenal is hysterically funny in his unpolitically correct lampoons of Roman life.   He satirizes the decadence and depravity of Rome, pretentious poets, the allure of breads and circuses, the nouveau riche, the ubiquity of Greek immigrants, houses collapsing because of bad construction work, transvestites, eunuchs getting married, women who poison their husbands, homosexuality, legacy hunters, lawyers… Is there anyone or anything he didn’t satirize?

There must be an American Juvenal:  I don’t know him or her.  No, so instead I will make observations about two comedians.

Amy Schumer in “I Feel Pretty”

Critics are fond of the comedian and comic actor Amy Schumer, or so I’ve heard. But why are throngs of male critics bashing her silly summer movie, I Feel Pretty?  Having seen the trailer, I know it’s the kind of trifling entertainment you watch in an air-conditioned cineplex when it’s 90 degrees–not the kind of film to be reviewed in The New Yorker.

But this goofy satire of male-defined beauty has infuriated male critics.   Richard Brody at The New Yorker censures Schumer and writer-directors Abby Kohn and Marc Silverstein for wasting their talent.  He hates the plot, which centers on an overweight woman who, after falling down at spinning class and bumping her head,  hallucinates that she’s actually beautiful.  Naturally, she becomes more confident.  He writes,

It’s easy to see how the stereotypical view of beauty that’s satirized in “I Feel Pretty,” which Renee faces and then overrides, could have meshed with the persona, and the themes, that Schumer has developed on her own, but Kohn and Silverstein aren’t sufficiently lucid about the implications of the comedic premise. Schumer should simply be writing her own movies—and working with directors whose artistry matches her own.

Peter Bradshaw at The Guardian manages to demolish the film in three paragraphs.  No, it doesn’t work for him, and the third paragraph tells us why.

Actually, Schumer is pretty, and the casting wouldn’t work otherwise, but despite the disconnect between how she is portrayed and how she feels, she is never really abashed and there is no comic friction. In fact, it is more a parable of how celebrities like Schumer, on becoming successful, suddenly get an inkling of how beautiful people have always felt. I Feel Famous would be an alternative title.

Ouch!  So he says Schumer cannot satirize male-defined beauty because she’s pretty–and then he stabs her in the back and says she only feels famous.  Bitchy, Mr. Bradshaw.

Aziz Asani in “Master of None”

At our house we are fans of Aziz Ansari.  His brilliant Netflix comedy, Master of None, is not only hilarious but insightful: in one episode, he explores the issue of racism against Indians (his American-born Indian character is  offered acting roles in which he must play an Indian with an accent) ; in another episode, he delightfully satirizes The Bicycle Thief (his phone is stolen in Italy, and the episode is even filmed in black and white). But after Ansari won a Golden Globe for lead actor in a comedy, he was accused of “sexual misconduct” by an adult woman who said she felt uncomfortable about having had mutual oral sex with Ansari.  All I can say is:  At least you didn’t get pregnant!  Because it is harder to get an abortion than you think these days.  (And don’t date celebrities, and especially don’t go home with them on dates, if you feel it’s going too fast!).

If all the comedians and satirists  must shut up because they (a) make us uncomfortable, (b) they are nasty people, or (c) they are too raunchy, where will we be?  This is America, where we have free speech. Do you think Lenny Bruce or Joan Rivers were nice people? Lighten up, people

Meanwhile, I’m rereading Juvenal’s satires.   They are funny.  Try Peter Green’s translation, in the Penguin or the Folio Society editions.

6 thoughts on “Prudery & Promiscuity: In Which Juvenal & Comedians Take on the World”