The Folio edition of Wuthering Heights

Oh, dear, I’m behind on bookish posts. I’ve been musing about the mortality of classicists and wishing poets and novelists would write satire.

But you might want to know if I’ve read anything.  This week it’s been Emily Bronte’s hair-raising Gothic, Wuthering Heights. 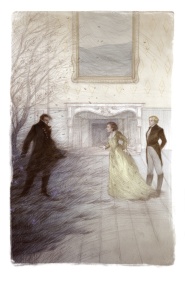 Wuthering Heights was my favorite Bronte novel until I switched in early middle age to Charlotte’s fierce spinster novel, Villette.  But I still  love Wuthering Heights:.  It transports me to the moors, which I’ll never probably see, and to a kind of love I haven’t, thank God, experienced in decades.   In 2014 I said of this gorgeous, intriguing novel about doomed love:  “It is a short, perfect novel, with lyrical yet muscular prose, brilliantly narrated by two unreliable narrators:   Lockwood, who rents Thrushcross Grange, spends a harrowing night at Wuthering Heights with his moody landlord, Heathcliff, after he is caught in a blizzard; and Nelly Dean, Lockwood’s housekeeper, tells him the story of Heathcliff.”

Bronte also describes the ramifications of the intense love between Heathcliff and Catherine Earnshaw, with whom he was brought up at Wuthering Heights.  The consequences of their separation after  Catherine’s marriage to mild Edgar Linton are tempestuous.  And Heathcliff’s rage affects the next generation, too.

So imaginative, wild, and terrifying!  Emily was a force unto herself.
It is Emily’s 200th birthday on July 30.  You’d better get a nice hat ad dress so we can mosey down to the bar to watch the ceremony.
Oh, wait.  That’s the Royal wedding.

6 thoughts on “Travels to the Moors: “Wuthering Heights” by Emily Bronte”