I have perused every Summer Reading article in the U.S. and UK:  this is only a slight exaggeration.  But as usual I stick to dead writers, and it is a bumpy ride down from the classics to the much-lauded books of summer. Perhaps I’ll commit to the Man Booker Prize longlist this year, because  I’ve got to read some good new books!

But I have read two excellent genre books: Tara Isabella Burton’s nerve-racking debut novel, Social Creature, a thriller about identity, the internet, and the pursuit of wealth, and Lindsey Davis’s Pandora’s Boy, the sixth in the charming Flavia Albia mystery series, set in ancient Rome.

And I am loving Victoria Glendinning’s new literary historical novel, The Butcher’s Daughter, which I found by chance  at Barnes and Noble.   Glendinning is one of the most brilliant English biographers of Elizabeth Bowen, Trollope, Rebecca West, Vita Sackville-West, and Leonard Woolf.  She is also the author of a stunning novel, Electricity, set in Victorian times.

I have begun The Butcher’s Daughter and am swept away by the elegant prose. Will Glendinning give Hilary Mantel a run for the money?

Here’s a paragraph from the book description at Goodreads:

In 1535, England is hardly a wellspring of gender equality; it is a grim and oppressive age where women—even the privileged few who can read and write—have little independence. In The Butcher’s Daughter, it is this milieu that mandates Agnes Peppin, daughter of a simple country butcher, to leave her family home in disgrace and live out her days cloistered behind the walls of the Shaftesbury Abbey. But with her great intellect, she becomes the assistant to the Abbess and as a result integrates herself into the unstable royal landscape of King Henry VIII.

What new books have you been reading this summer?  And I mean by living writers!

1. At the Guardian, Natalie Haynes answers the question, “What are the best novels about ancient Greeks and Romans?”

She recommends Emily Wilson’s new feminist translation of Homer’s Odyssey Daniel Mendelsohn’s memoir,  An Odyssey: A Father, a Son, and an Epic, and Margaret Atwood’s Penelopiad, Lindsey Davis’s Roman mysteries (which include Pandora’s Boy, above), and more. 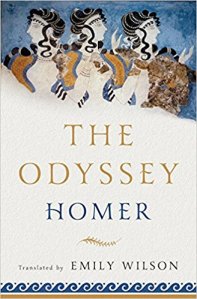 2. At the TLS, Mary Beard writes about Robert Harris’s Cicero on stage in London.  (And she inspires me to want to revisit Harris’s  trilogy, because I quit halfway through the second novel, Lustrum. I found it boring.  I do love Cicero, though, and recommend his brilliant defense of liberal arts, Pro Archia.

Cicero has a lot to thank Robert Harris for. Many of us have struggled to make the Roman orator interesting for a modern audience. But I fear that my worthy PhD thesis (‘The State Religion in the Late Roman Republic: a study based on the works of Cicero”) have had far less effect on Cicero’s modern fame than Harris’s trilogy, Imperium,  Lustrum, and Dictator which have given us back a funny, enterprising, self-ironic and clever Roman politician (with a career ending, as they all do (I’m quoting E. Powell here, who knew) in failure. In Cicero’s case, that meant decapitation.

3. At Wired, you can read Arielle Pardes’s article about an academic conference on emoji.  Gotta admit, the only one I use is 🙂

Here’s an excerpt from the article:

At Stanford University this week, a collection of linguists, data scientists, computer researchers, and emoji enthusiasts gathered for the International Workshop on Emoji Understanding and Applications in Social Media, itself a smaller piece of the AAAI Conference on Web and Social Media. They brought with them research on how emoji are changing the way we communicate online, how gender and political affiliation are reproduced online through emoji, and the challenges emoji pose for natural-language processing in computers. The assembled academics also debated basic questions about the nature of emoji: Like, if emoji is something akin to a language, why can’t anyone agree on what individual emoji mean?

12 thoughts on “What New Books Are You Reading? & Three Literary Links”