I have been rereading Seneca, one of my favorite Roman philosophers.  As you can imagine, I am fascinated by his views on reading.  He tells us to read the greats and not to buy  too many books.  If you need to build a book shed in the backyard, as critic Michael Dirda says he did,  Seneca will solve your space problem. 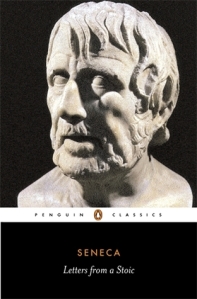 In Letter II in the Penguin edition of Seneca:  Letters from a Stoic (translated by Robin Campbell), Seneca says,

A multitude of books only gets in one’s way.  So if you are unable to read all the books in your possession, you have enough when you have all the books you are able to read.  And if you say, ‘But I feel like opening different books at different times,’ my answer will be this:  tasting one dish after another is the sign of a fussy stomach, and where the foods are dissimilar and diverse in range they lead to contamination of the system, not nutrition.  So always read well-tried authors, and if at any moment you find yourself wanting a change from a particular author, go back to ones you have read before.

Good advice:  but I love having a multitude of books!   Many bloggers read two or three or several books in a given period, switching from one to the other, and then back again.  (We’re reading like book review editors.)  Did Seneca predict twenty-first century ADHD?  Was there ADHD before it was invented?  Or do we modern readers simply read as many books as possible to compensate for online diversions?

FEMINISM ON DANCING WITH THE STARS.

Rose (in black) talking last night to Hough (in pink) about body-shaming.

Dancing with the Stars pits celebrities you’ve never heard of with  their pro partners against other celebrrities.  (The Olympic athletes are the only ones I know.)

In the “video packages” before the dances (and why not call them “videos?”), editors shape our view of the stars.  Some are presented during training sessions as whiny prima donnas, others as gracious and charming, still others as outrageous bad boys and girls.

Yes, it is fun; it is also trashy.   Scantily-dressed women shake their booties (literally last week to a song called “Shake Your Booty”) while men keep their pants on but bare their waxed chests.  If you’re a Second Wave feminist like myself, you believe it is degrading for women to wear the skimpy costumes that define them in these dances.  On DWTS, feminist values are reversed:  all dances must be “hot,”as they have said for several seasons, or “sexy,” a disyllabic word they have all mastered.  To be fair, judge Bruno Tonioli has a colorful, sometimes extensive (ahem!), vocabulary!

But the director is taking the show in a trashier direction this season.  Now we hear the judges’ private conversations  and the pros’ coaching during the dances. It was only a matter of time before there was a conflict.   One of the stars, Amber Rose, a talk show host, told judge Julianne Hough that she felt “body-shamed” when Hough remarked last week to the other judges that Rose’s dance made her “uncomfortable.” Poor Rose was stuck dancing to “Shake Your Booty.”  Yup.  That was her degrading assignment.  Rose wiggled her butt over and over and over.  It was like Pole Dancing Night, sans pole.

Why did we see this conflict on the air?  I don’t like squabbles on TV.  It was like a scene from Valley of the Dolls, where women are valued only for their bodies and are terrified as they age. Frankly, these beautiful young women haven’t got the faintest idea what  body-shaming is-yet.

Bit Rose made a good point.  She said all the “girls” are scantily dressed, and she felt she was singled out because of her body. (And she was:  they gave her the humiliating song because she has a voluptuous butt.)  She also said she was afraid she would be considered too “sexy” if she did much more than wiggle

Refusing to dance to some of these songs, because they are sexist, or to wear those costumes, would be a good start in squashing the body-shaming.  But you don’t know that when you’re young.

I used to have a blushing problem.  The solution:  makeup.

Except I’m allergic to makeup.

I am slightly less allergic to makeup than sunscreen, so I slap on foundation before I go out on my bike.

And I no longer blush, except from food allergies.  No Kung Pao Tofu for me.

Seneca, the Stoic philosopher, doesn’t concern himself with makeup and sunscreen.  In Letter XI to his friend Lucilius, he does, however, talk about blushing.

Seneca meets a bright, talented, eloquent young friend of Lucilius’ whose face is suffused with redness as he speaks.

In other words, he blushes.

Seneca does not think this is a bad thing.

This blushing, I suspect,will follow him, even after he has strengthened himself and stripped himself of weakness–even when he is a wise man.  For the natural weaknesses of the body or the spirit are not subdued by wisdom:  whatever is implanted and inborn is attenuated by art, not conquered.”

Even some of the strongest, most powerful Romans have blushed, says Seneca.  He claims Sulla was at his most violent when “the blood had invaded his face,” that Pompey always turned red when he addressed the assembly, and Fabianus modestly blushed when he appeared as a witness before the Senate.

Seneca thinks you should accept blushing.  It is natural.

Too bad it’s such a pain.  Thank God for hypoallergenic makeup.

It started in London.

I was at Foyles (the big bookstore), and I was very tired, because I had not had coffee:  I had jumped out of bed and taken the tube to Leicester Square so I could beat the crowds at the National Portrait Gallery, the National Gallery, and possibly Foyles.

I was delighted, because I can sight-read Seneca.  I know most of the vocabulary, though not always the use in the Silver Age.

So I went into the bookstore’s coffeehouse part, no idea what floor I was on, because this is a huge bookstore, and sat down at the coffee bar with a huge cup of coffee.  And I fell into Seneca.

Here is a rough translation of the opening lines:

What do I think especially you should avoid? you ask.  The crowd.  You cannot yet entrust yourself to it safely.  I certainly will confess my own feebleness:  for I never bring back the morals I went out with.  The peace I have made by myself is thrown into disorder, that which I fled has returned.

And here is the Latin:

The National Gallery and the National Portrait Gallery, both at Trafalgar Square, were a little less crowded in the morning (I went twice) than in the afternoon.  Still, it was very crowded, and I didn’t take notes (which I always do at museums), because it was simply too distracting.  Everybody stays for a few seconds in front of a picture and then takes off!   You end up getting joggled.   (I bought a book about the National Gallery; I suppose it beats my notes, but not really, because I like to read the art historians AND have my impressions.)

Oh, well, it was better than the crowds at the mall.  I spent $125 on a watch last time I was there, and I could have bought one for $25.  It just goes to show I get mesmerized in crowds, and not for the better.  Art books are fine, yes; expensive watches that aren’t even jewelry, no.

Another thing I love about the Seneca letter:  he quotes three philosophers on the crowd.

Here is another rough translation, followed by the Latin:

Democritus said, “To me, one man is the crowd, and the crowd is one man.”  Another man also answered well, whoever he was (the author’s identity is doubtful), when asked what was the good of so great an attention to an art that would reach a very few: “The few are enough for me,” he said, “one is enough, none is enough.”  And, excellently, Epicurus said this third thing, when he wrote to one of his colleagues about his studies: ‘I do not write these things for the many, but for you, for each of us is enough of an audience for the other.”

I avoid the crowd, but I am still influenced.  The culture seeps in, with its new attitudes…

And that is one very good reason to read the classics.  It keeps you up with the best in thinking, so you don’t go in for “crowdsourcing” or some horrible modern thing…

AND NOW HERE I AM ON FASHION:

Fashion: But What If You Use Your Head?

I am not fashionable.  I have a wardrobe of jeans and sweaters.  They’re nice jeans, mind you.  My idea of fashion is to wear black or very dark navy jeans with a cardigan sweater or what is, no doubt, an out-of-date peasant top.  I own only one dress, a black Liz Claiborne  I abandoned on the floor of the closet circa 1996.  I last wore it to an awards dinner.  I had forgotten all about this award actually, because it was kind of a fake award, awarded by a PR magazine for some deed I don’t even remember, and I didn’t get a plaque.  If I don’t have a plaque, how can I remember?  My picture was printed in the magazine instead.  My mother was the only one who liked the photo.  And I didn’t even retrieve it when my mother died last August.  In fact, I didn’t remember it until now.

So I’ve worn the sturdy jeans–not cheap jeans, mind you–for decades, and they’ve never done me harm.  Even my mother admitted a few years ago that, as far as she could see from watching The Talk and The View,  jeans were the fashion, with the addition of high heels and a nice top.  I certainly don’t have the high heels.

In the last six months, I have navigated the high fashion districts of Washington, D.C., and London in jeans.

Well, not  fashionable.  I did go to the Kennedy Center in jeans and a cardigan. But then Washington is a bit dowdy, isn’t it?   And I went everywhere in London in jeans and cardigans, though I didn’t quite go anywhere fashionable.  There IS fashion in London.

Today I was less fashionable than usual.  Have you ever had a day when you needed to wear soft clothing?

I got up today and needed to wear everything soft, but I couldn’t spend another minute in my pajamas after taking the garbage out and having a conversation with my neighbors in my pajamas.  Yes, yes, almost warm enough to garden, but not quite yet.  The snapdragons are already sold out at the neighborhood store.

When I got back in, I closed the door and really could not believe I’d had a conversation in pajamas with holes in one knee and a rather peculiar print top (llamas on it!) that never quite goes with anything.

I put on hospital scrubs and an old sweatshirt.  I just didn’t care that everything was wrinkled.  Criss-cross wrinkled, like all garments that live on the floor of the closet.

I haven’t worn these scrubs since maybe 2010.

Sometimes one needs a day of wearing soft clothing.

And maybe to drink a lot of water and have chicken soup, too.