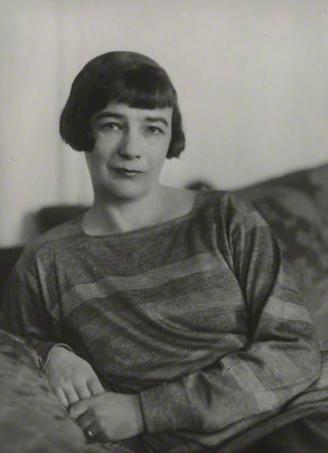 I began to read Sheila Kaye-Smith after the writer Charlotte Moore recommended her in a “Books of the Year” article in The Spectator.

Last year I very much enjoyed Joanna Godden, Kaye-Smith’s intriguing, if inelegant, novel about a woman sheep farmer.  And recently I found a free copy of The End of the House of Alard at Internet Archive. Published in 1923, it is the absorbing story of the fall of the aristocratic Alard family.  It begins by sketching the history of the Alards, from their earliest ancestor in  the Crusades to the present squire, Sir John, in the twentieth century.  The Alards still have their estate at the end of World War I,  but no money, partly because of Sir John’s bad investments, mostly because of the war.

This  is a departure from Kaye-Smith’s early rural novels, which Stella Gibbon satirized in Cold Comfort Farm, along with books by Mary Webb and D. H. Lawrence  But it is easy to see why The End of the House of Alards was a best-seller.  She fascinatingly portrays the consequences of the war and the changing culture.  The Alard veterans of the Great War are still harnessed by tradition, while the younger Alards question social class as they fall in and out of love or seek meaningful work.   The oldest son, Hugh, was killed in the war, but two other sons survived:   Peter, the new heir, will manage the estate, while George, a clergyman, holds the family living.

The return of the heir is the impetus of the novel, almost a satire of other such returns of heirs.  In the second chapter, the family is excited as they await Peter’s homecoming.  His mother barely recognizes him out of uniform; he has become much  heavier and more stolid.  Even the writing here is a bit heavy-handed, I’m afraid.  (But I loved the book).

Here is how the house looks to Peter.

The drawing room was just the same as it had always been….The same heavy dignity of line in the old walls and oak-ribbed cieling spoilt by undue crowding of pictures and furniture.  Hothouse flowers stood about in pots and filled vases innumerable… a water-colour portrait of himself as a child faced him as he came into the room.

Although Peter is conventional, he has been changed by the war. For one thing, he is untraditional in love.  He is in passionately love with the doctor’s sexy, intelligent Catholic daughter, Stella Mount.  (Yes, I noticed that name, too.)  Their idyll is vaguely reminiscent of love affairs in D. H. Lawrence’s novels, though Peter doesn’t have a Lawrentian mind.  He lets himself be talked out of marrying  middle-class Stella, and marries a rich Jewish woman for her money. (An anti-Semitic portrait of his wife:  write it off to the times. The point is not the woman, but that he sold out.)

Mary, the only married daughter, is also unhappily married.  She leaves her rich husband to live on her own and he divorces her on fallacious grounds of adultery.  Her father forces her to defend the suit, and there is a scandal.  Finally she goes quietly away

The youngest brother, Gervase, a Catholic convert, has broken with the old life –to an extent that shocks even his most liberal sisters, Mary and Jenny.  Reverend George is crushed when he realizes the Catholic church offers more comfort and ritual to Gervase than his own Anglican church and good works.

And Jenny, who cannot meet an appropriate man, consciously decides to chase the rich farmer to whom she is attracted, Godfrey who has bought land from the Alards.

On the morning when she first goes to flirt with him,  she thinks of Stella.

She remembered once being a little shocked by Stella Mount, who had confided that she liked making love herself just as much as being made love to….  well, Jenny was not exactly going to make love, but she was going to do something just as forward, just as far from the code of well-bred people–she was going to show a man in a class beneath her that she cared for hm, that she wanted his admiration, his courtship…

The oldest sister, Mary, is a hysterical spinster, devoted to her parents, and envious of the young.  The youngest Alards have the best chance of happiness, because they reject the past.

This novel is much better-written than Joanna Godden, and I look forward to reading more of Kaye-Smith’s novels.