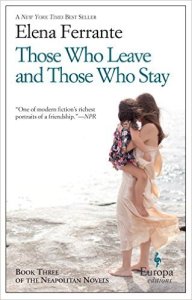 We’re ignoring the flags but celebrating the first weekend of summer with beverages, barbecues, and books.

Beverage:  Arnold Palmers (half iced tea, half lemonade).  We rattle the iced cubes in Great-Aunt Helen’s big pink champagne glasses as we sip the tea. They are the last glass glasses in the house. We have broken all the rest–not like F. Scott Fitzgerald and Zelda, who simply did it for kicks–but because of dishwashing accidents. At this point we prefer plastic.

Books:  I’m finishing up the third volume of Elena Ferrante’s Neapolitan Quartet, Those Who Leave and Those Who Stay, set in the late ’60s and the ’70s.  Yes, it’s literature (kind of), but it’s also a beach read, perfect for a wide spectrum of readers, from fans of Middlemarch  and The Group to aficionados of The Diary of a Mad Housewife and Fear of Flying.  It’s a grittily realistic pageturner, but, honestly, I find it somewhat trying. Both Lena and Lila, the two heroines, are getting on my nerves.

I am ambivalent about Ferrante’s work.  Enjoyable as it is, it is very hard for me to catch the worldwide excitement about these ultra-traditional novels about women’s friendship.  I can see why they are popular:  these straight-ahead reads require very little work.  Ann Goldstein’s translation is  smooth and readable, though I’m finding Those Who Leave and Those Who Stay  less riveting than the first two volumes, My Brilliant Friend (which I wrote about here) and The Story of a New Name (which I wrote about here). Whether Ferrante or the translator lost pep, who can say?

The narrator Lena has published her first novel and goes on a book tour, feeling insecure about the book but also excited by its popularity.  Visiting her parents in Naples, she runs into old girlfriends who fervently praise it for the “dirty” parts, i.e., beach sex scenes which capture women’s ambivalence toward sex. She is engaged to a likable professor, who insists on a civil ceremony, and that is a point of contention with her mother, who wants Lena to have a big wedding like Lila’s. And Lena is still fascinated by her childhood friend Lila, a working-class prima donna who has left her husband, lives with their childhood friend, Endo, with whom she refuses to have sex, and now works at a  sausage factory, leaving her child with a neighbor while she works.  Lila is sexually harassed at work, but is not a victim:  she takes care of herself and knows how to say no, thank God!   But after she confides in radicals about how women are treated, they show up to protest at the factory and she gets in trouble.  Then Lena writes a newspaper article based on Lila’s carefully-written study of the factory.  No wonder her old teacher, who saw Lila’s version first,  snubs Lena and pays more attention to Lila’s writing!  Of course that’s also part of what happens to people who succeed and come back to their hometown: people begrudge the prodigal’s success!  But Lena does exploit Lila’s experience for her writing. 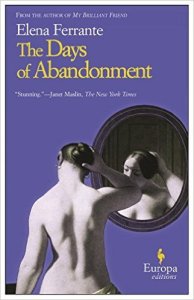 It’s a very fast read.  But honestly?  I  tire of Lila’s hyperbolic tantrums (are they Italian?). And Lena’s typical experiences with her insomniac baby and unsympathetic husband, who goes on writing and ignores the crying baby,  seem barely sketched in.  Of course that mightbe a translation problem.

For me, this one is the weakest of the novels (so far)!  I do want to love these best-sellers, and yet…

On the other hand, I do recommend Ferrante’s The Days of Abandonment, a truly Kafkaseque narrative  peppered with the feminist outrageousness of Doris Lessing and Marilyn French. The narrator, Olga, a housewife, goes mad when her husband deserts her for another woman after 15 years, leaving her with two children and a dog.  She is mystified by his departure, and the hours, days, and weeks that follow are described with agony, spite, and humor.  Eventually Olga gets her own back!

If you’re not interested in reading Ferrante, here are some literary links that will give you other options for Memorial Day! 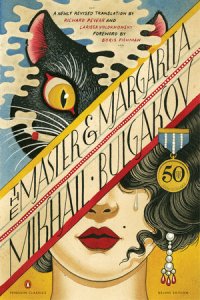 1  Boris Fishman writes in The New York Times about the fiftieth anniversary of the publication of Mikhail Bulgakov’s The Master and Margarita.  This excellent essay begins,

Were it a kinder world, Mikhail Bulgakov’s incandescent novel “The Master and Margarita” would be commemorating its 75th rather than 50th anniversary, for the author completed it in 1940, just as his own brief life was ending. But in the Soviet Union of the time — then concluding one of the most grotesquely violent decades in history — the fate of authors like Bulgakov was so precarious that he was fortunate to die of natural causes. Having finished the book, he reportedly said to his wife from his deathbed: “Now it deserves to be put in the commode, under your linens.” She did not even try to get it published. A censored version finally appeared in 1966-67. 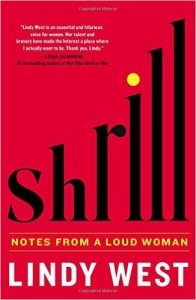 2 At Lenny, in the article “Lit Thursday: Books That Won’t Disappoint,” Lena Dunham says she is reading Lindy West’s Shrill.

Lindy has made a name for herself as one of the fiercest and funniest feminists working today. The Internet has been her medium and she’s used it beautifully, responding in real time to trifling comedians and even less impressive trolls. But a writer as skilled as Lindy deserves long form consideration and Shrill, her hybrid memoir-cultural critique-manifesto, does not disappoint. It fulfills the promise of her many well considered (and fucking hilarious) internet offerings. Lindy deftly moves between painful personal recollections, assessments of the sorry state of body positivity, and a clear eyed view of what the feminist movement needs to do so that sisterhood doesn’t kill off its sisters. I am so happy I’ve been reading her for half a decade. I’ll be doing it for another half a century.

3 At The New York Review of Books, Hermione Lee reviews All the Poems by Stevie Smith, edited and with an introduction by Will May  (New Directions, 806 pp., $39.95) 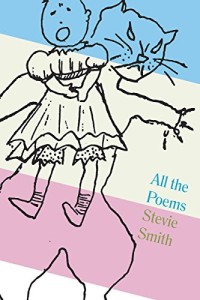 6 thoughts on “Memorial Day Weekend Reading, Elena Ferrante’s Those Who Leave and Those Who Stay, & Literary Links”